Hiking and adventure activities, UNESCO World Heritage cities, good food and better wines. Shake it all up with some good weather all year round and you will get one of the best destinations you can holiday at, Tenerife. But also don’t forget to visit the best beaches around Tenerife.

With an average annual temperature of 22ºC (71ªF) visiting Tenerife means that swimming pools and beaches tends to be fairly crowded. During winter months the sea temperature is around 18ºC (64ºF) so the conditions are very good to check out the main beaches in the island. By the way, many of them have the Blue Flag certification. 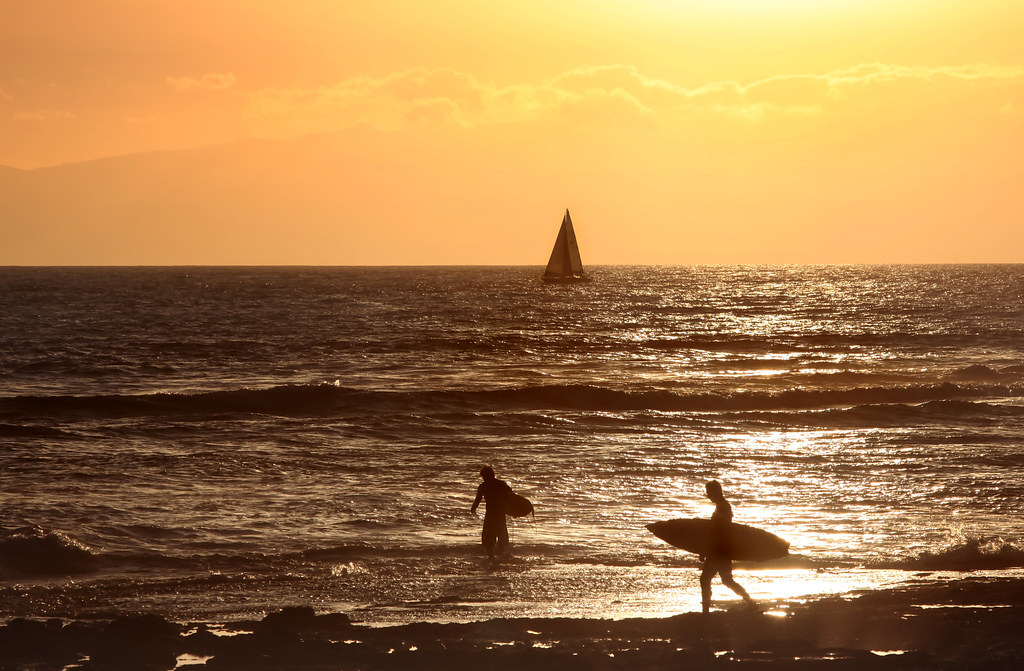 Each year Tenerife has about 12 beaches with Blue Flag although its number varies from season to season. Please note that many of the best beaches around Tenerife have black sand due to its volcanic origin. Also, black sand is much easier to take of your feet once dry, a plus that yellow sand beaches don´t have.

The Blue Flag is awarded by a non-governmental organization called the Foundation for Environmental Education. They evaluates certain beach standards such as water quality or the availability of certain services such as lifeguards, access by public transport, cleaning or environmental care plans among others.

Our selection of the 8 best beaches around Tenerife

Nested in the Orotava Valley and surrounded by banana plantations El Bollullo is one of the best beaches in the valley. It is one of those beaches in Tenerife with black sand but watch out, currents are strong and very dangerous in the north shore so we recommend you to keep an eye on younger and elderly. On the beach there is a small bar.

Next to El Bollullo you can visit two other beaches, Los Patos and El Ancón. Access to both is quite difficult due to the abrupt terrain and a lack in any kind of services (lifeguard, bar) but in the other hand they are very nice (and wild). 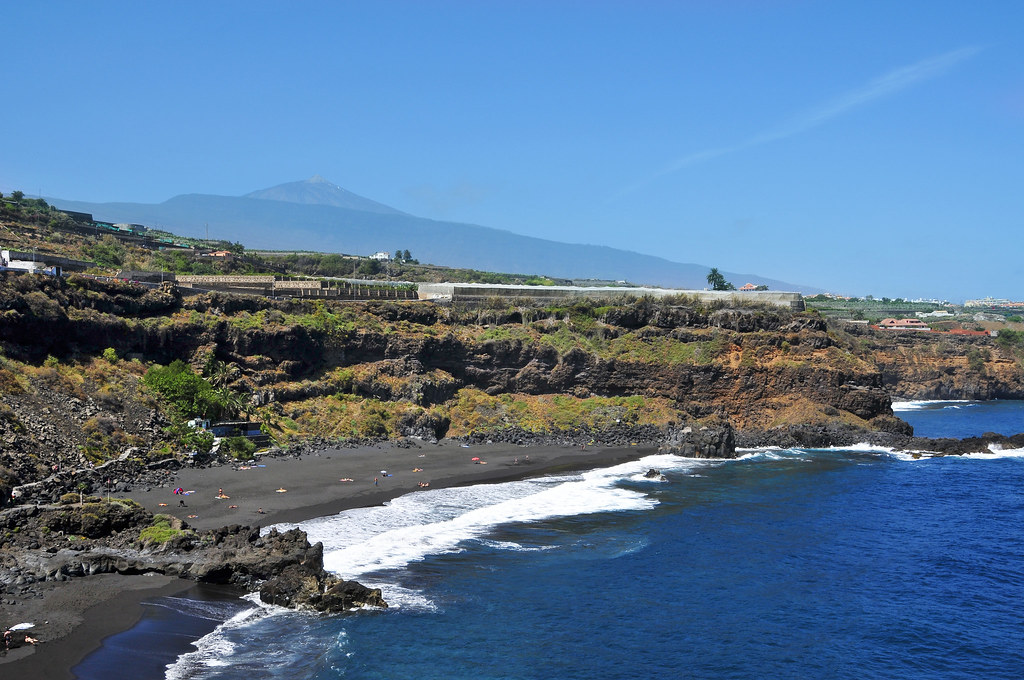 • How to get to El Bollullo?

From here, you need to follow the indications to the TF-176 that runs towards the coast through banana plantations, you will come to a 2 way road. Taking the narrow path on your left hand you will reach the top of the beach where the only option for parking is a private lot in which you have to pay (2€ all day).

This is another one of the best beaches around Tenerife. El Socorro is heaven when the tide is low and the sea is calm. When the conditions are not those this beach takes you to the next level is you are a surf lover.

Pay attention to the lifeguards indications. This beach has a Blue Flag and services like a small restaurant and showers. 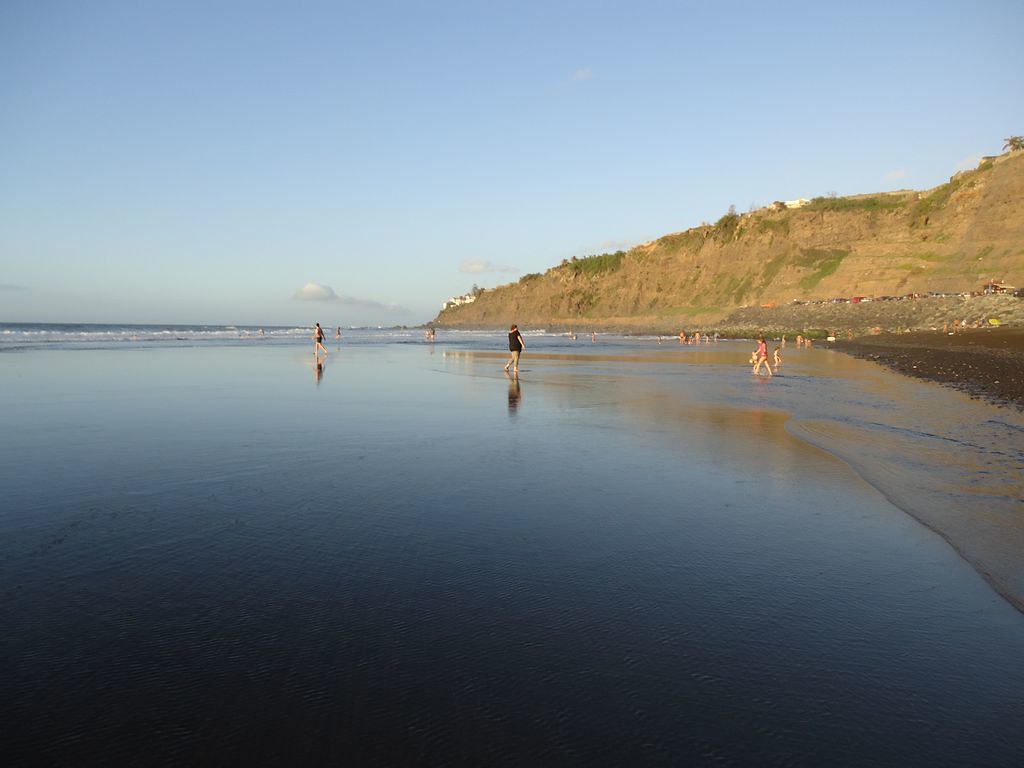 • How to get to El Socorro?

El Socorro beach is located in the municipality of Los Realejos. To get to the beach, you need to take the TF-5 motorway until you find a signposted detour a few meters after San Pedro viewpoint.

You can get to the the beach by car and park right next to the sea although spaces are limited specially during the summer months.

Puerto de la Cruz is the main tourist city in the north of Tenerife and a perfect place from where you can discover the rest of the island.

In town you can find several beaches being Playa Jardín the most recommended of all. It is a black sand beach equipped with all the necessary services. It has a Blue Flag. 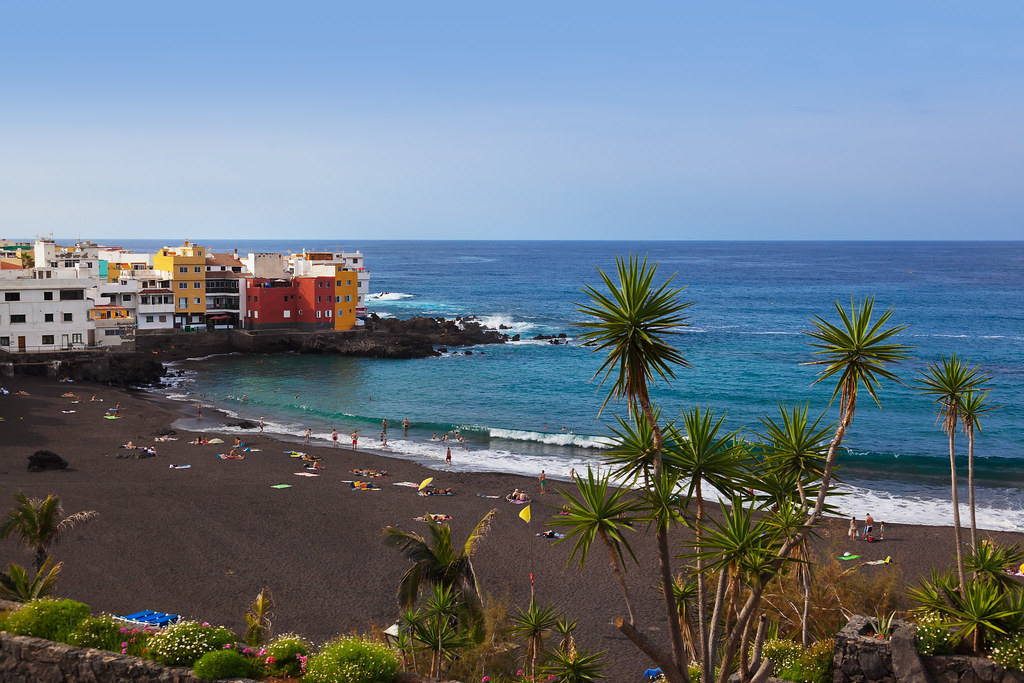 • How to get to Playa Jardín?

This is the number one beach if you are after a crowded beach all year round. This is because it is located in one of the main tourist areas in the entire Canary Islands.

You can feel at home on this beach as the surrounding bars all offers full english breakfast, football matches and a wide range of imported beers. Little more to add besides that it is one of the best beaches around Tenerife to enjoy with the family. 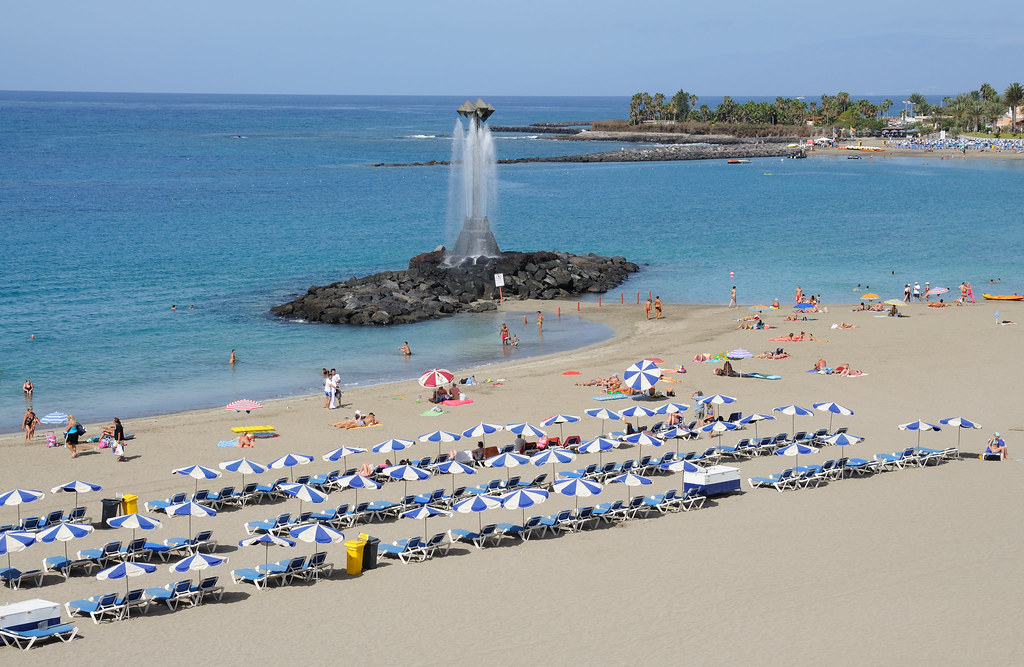 • How to get to Las Vistas Beach?

Taking the highway TF-1 southwards of Tenerife (heading to Arona) it will not take you long before you find the exit towards Los Cristianos.

From there it is easier to locate the port from where the ferry leaves for La Gomera. You should park nearby. The beach is very close and its sea front is full of restaurants, cafes and shops so it´s worth walking and enjoying your way there on foot.

Located in the northwest corner of Tenerife and far from the island’s tourist centers you can find the wildest and most spectacular beach out of all those mentioned in this publication. It´s probably one of the best beaches around Tenerife ever.

The coastline in this part of Tenerife offers stunning sunsets. Its two great rock stacks situated offshore give the area a mystical and adventure look that will delight the most professional photographers. 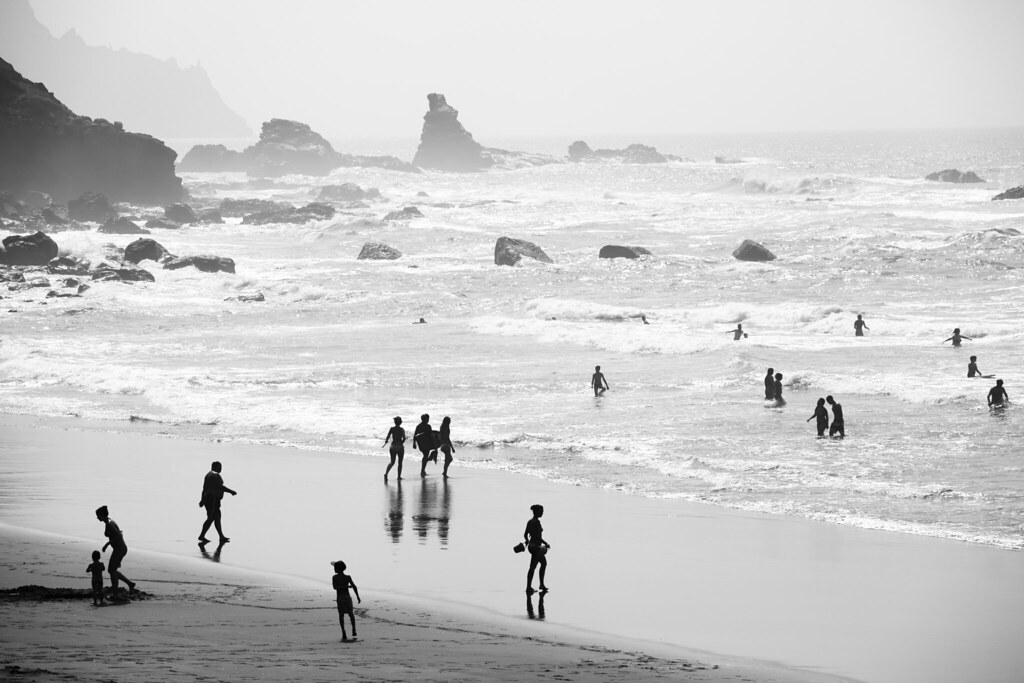 • How to get to Playa de Benijo?

Although access to Benijo beach  is not at all complicated it does require some time and willingness to take in all those curves and bends you will be cruising though, driving round Anaga is great but it takes time.

Probably the fastest way to reach Benijo is starting the drive from San Andrés (the neighborhood where Las Teresitas beach is situated). From there you need to take TF-12 towards Taganana before reaching Benijo beach

El Médano and its beach are very common with locals and few foreigner. They are an ideal place for windsurfing or kitesurfing. It has a lot of services and a very relaxed atmosphere that invites you to chill out and relax. The beach has a Blue Flag.

Additionally, very close to El Médano and located right below Tenerife South Airport (Reina Sofía) you can find La Tejita beach. A beach with golden sand where nudism is usually practiced, if you are lucky enough to enjoy a windless day (no doubt, La Tejita is our favorite beach). 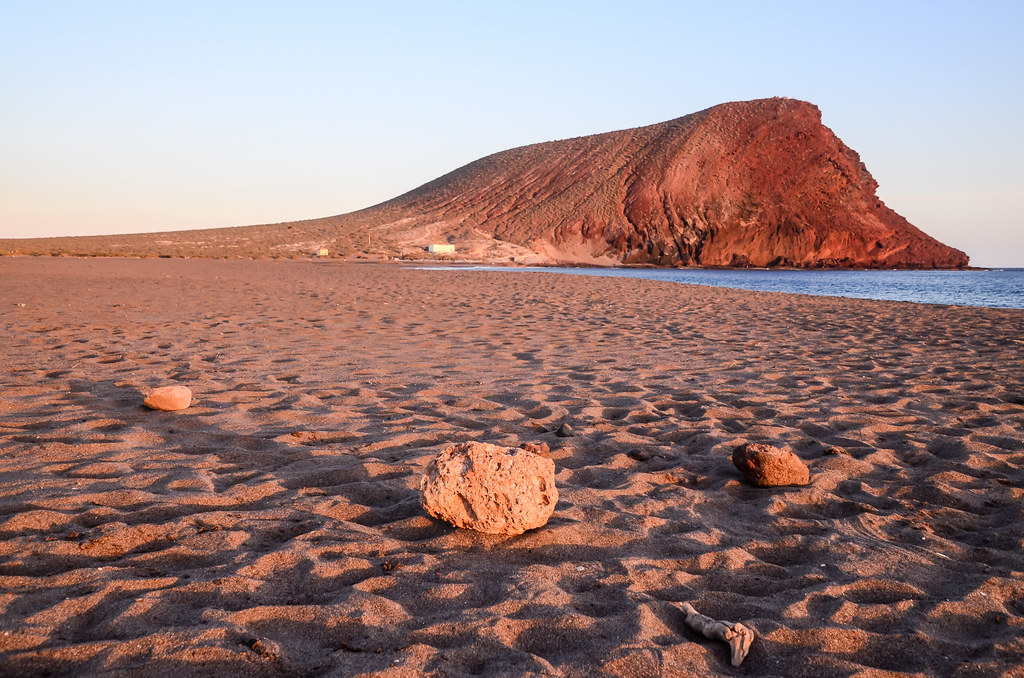 • How to get to the beaches of El Medano and La Tejita?

Taking the main motorway on the island and heading south (TF-1) you need to reach the sign for El Médano. A roundabout later and a long 3 km road (TF-64) that runs directly to the sea and you will be right in the center of El Médano.

Some 500 meters before reaching the town you will see a junction towards Los Abrigos neighborhood ( TF-643 – a fishing boat will show you the way). From this junction 2 km away and on our left you will find La Tejita.

It´s the caribbean taken to Tenerife. Playa de las Teresitas is one of the most popular beaches in Tenerife when it comes to promoting the island due to its yellow sand and its proximity to the San Andrés neighborhood.

It took about 270,000 tons of sand drained directly from the Sahara to create this wonderful beach located a few kilometers from the capital of the island. Parking, lifeguards, beach bars and sun decks are just some of the services available on this beach suitable to come with the whole family. 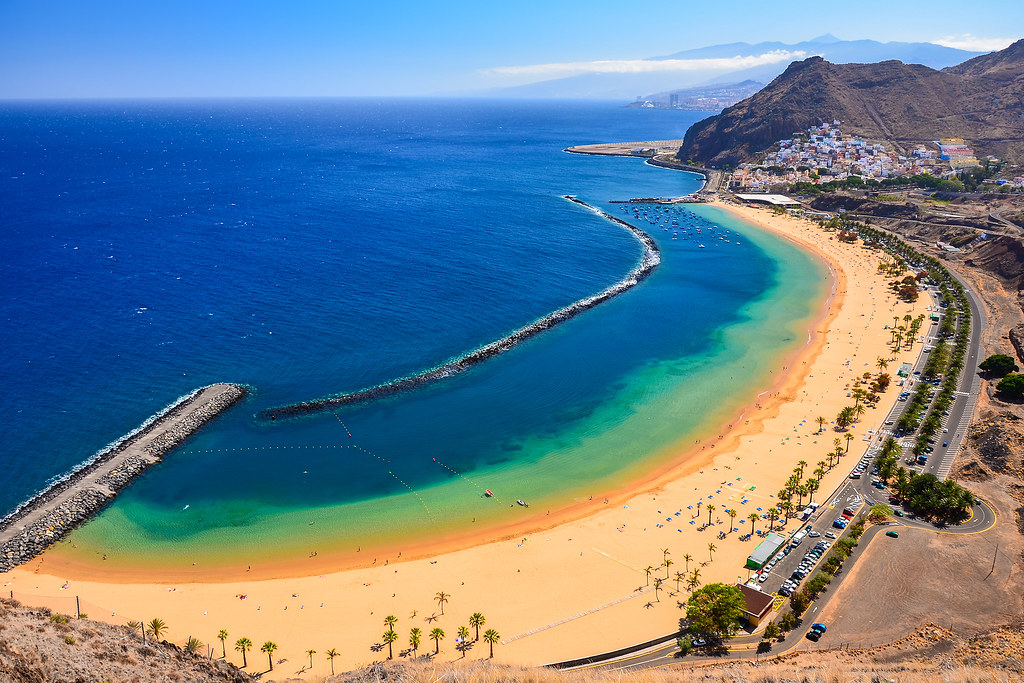 • How to get to Las Teresitas beach

Despite not being inside the city, Las Teresitas is very close to the capital of the island. You only have to take the TF-11 seafront road (it is very ugly by the way) in the direction to San Andrés. After a few km of driving between fishing basins and cement factories you will reach your destination

Perhaps not so famous as other of the best beaches around Tenerife but we have included this small beach because it is very close to the great cliffs of Los Gigantes (a must if on holiday in the island).

This area is not only famous for its great animal diversity (dolphin and wale watching) or active tourism activities (kayaking) but for being a much quieter place than Adeje and Arona. 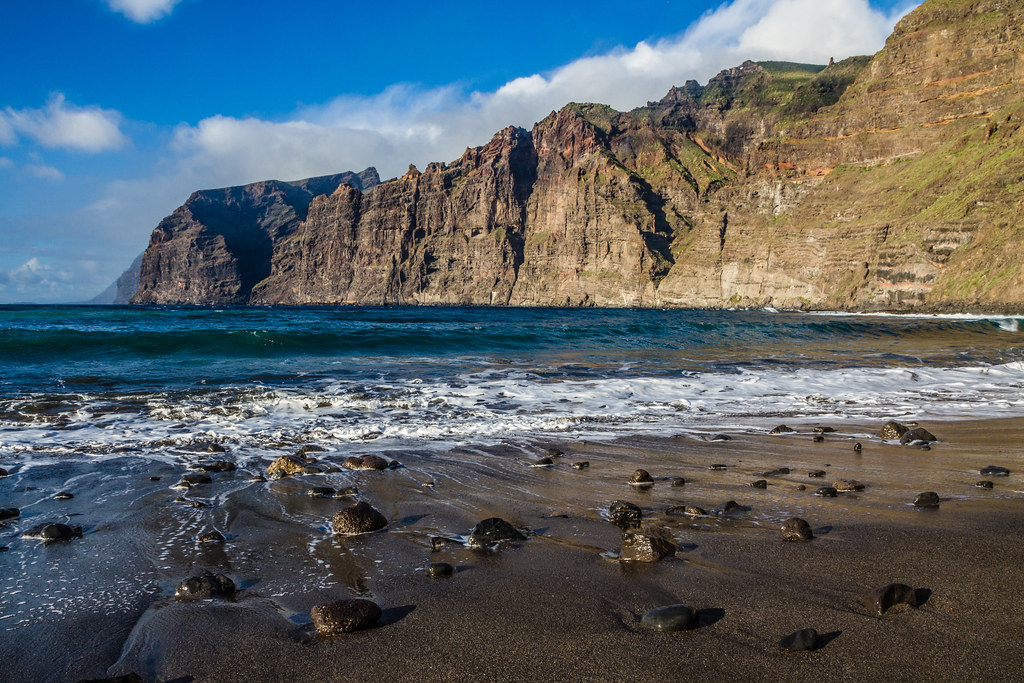 • How to get to the beach of Los Guios

You need to take the road TF-47 towards Los Acantilados de Los Gigantes in Santiago del Teide. It is best to get oriented with the signs that indicate «Puerto Deportivo» because the beach is next to it.

Other 5 natural pools and beaches in Tenerife that we recommend

While its beach is nothing special, its environment is awesome. Teno Rural Park flows into several beaches with difficult access. The easiest to reach is the one located at the very end of the island, in Punta de Teno. It is a small beach with a beautiful view. It´s not among the best beaches around Tenerife but you should at least check it out.

Garachico, without a doubt, is a town that you should visit. Its historical importance in the development of Tenerife, its cobblestone streets, its charm invites you to walk and get lost round the city center (a very small one).The visit will not be complete without a swim in El Caletón (natural pools) formed after the eruption of the volcano Arenas Negras (1706). 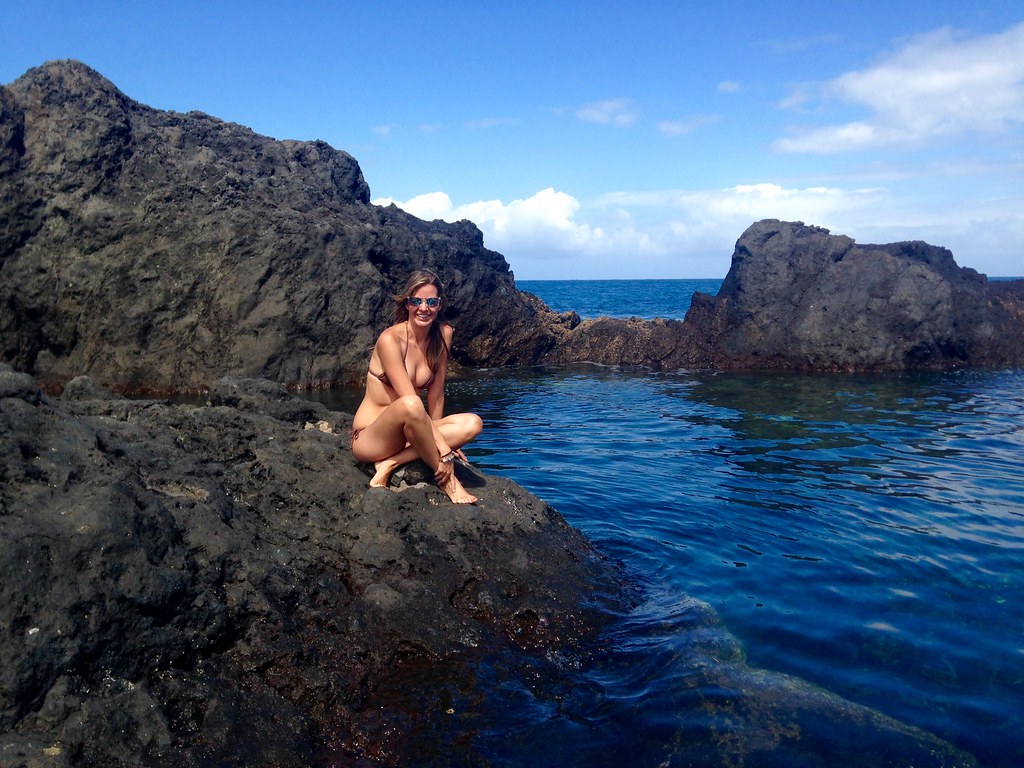 This beach lies at the foot of an impressive slope where stones run down frequently (much of it has protective nets). A small half moon shape beach is one of our favorite as best beaches around Tenerife. The beach is frequented by locals. Also, in the area there is an artificial pool that fills up with sea water when there is high tide, you can also swim there.

With privileged views of the area of ​​Bajamar and Punta del Hidalgo the natural pool of Jover is one of the best kept secrets of the island of Tenerife. Jover is located in Tejina, a small town that belongs to the municipality of San Cristobal de La Laguna, and its atmosphere is very familiar and peaceful. There is a parking area near the pool, lifeguard and a small shower with water from a nearby gallery, it is a very cool spot! 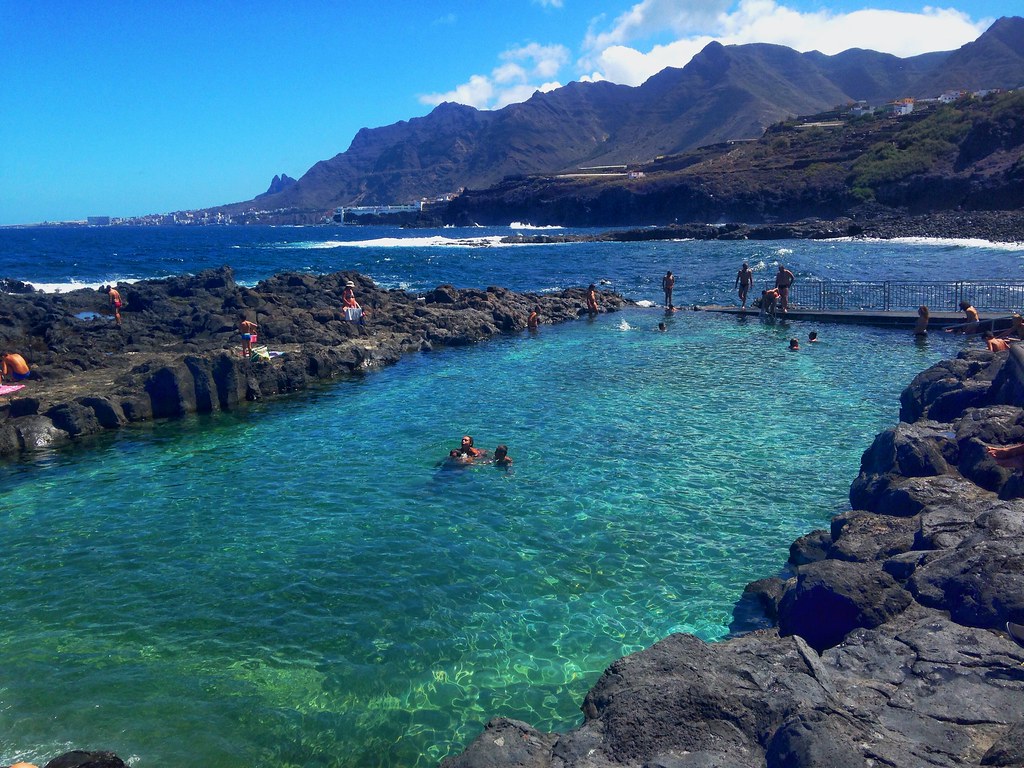 Some people affirm that it should not be in this section of best beaches around Tenerife, however it is one of the islands main attractions and, in addition, the water is from the sea! We are talking about a complex of sea water artificial pools. It´s a great place to relax specially in winter, 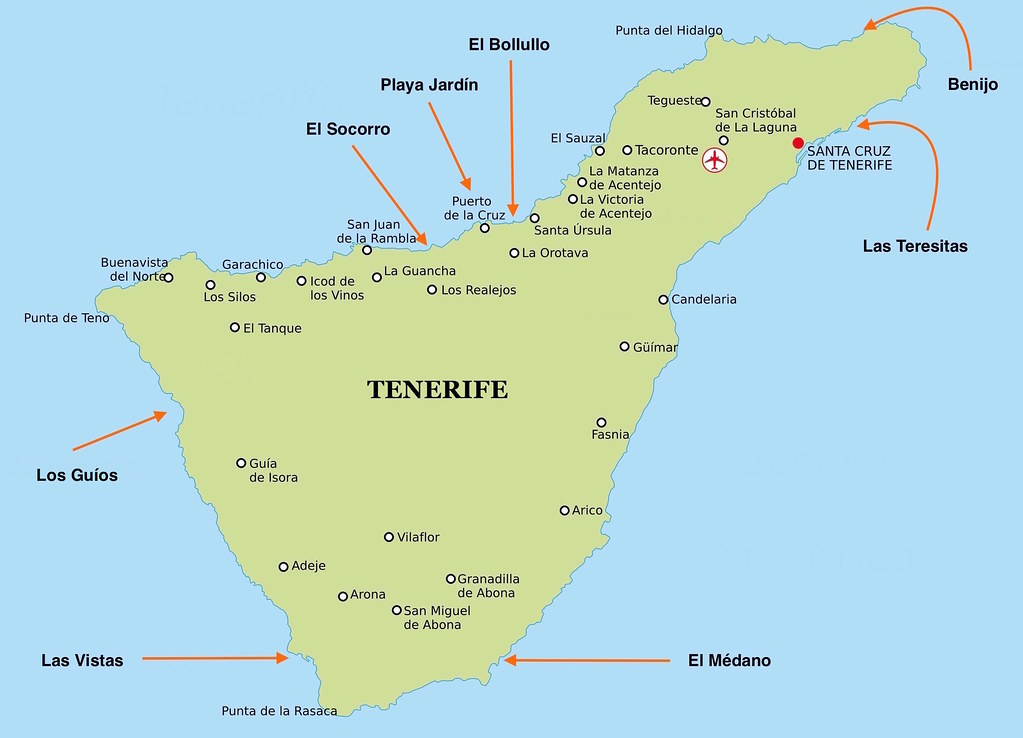 Tenerife has all you may need to enjoy your holidays. Renting a car is a must to get around at your own pace and to discover those hidden gems (Mount Teide is one of them) that booked tours rarely get to show you. Anyhow if you are in a package tour but still want to do some tours by yourself please check this selection ↓